The London Riots from a gang member's perspective 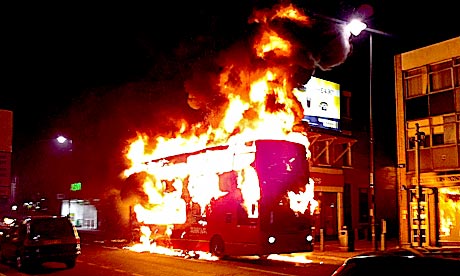 Update: To be clear, I have no connection with any gangs whatsoever. The following is my personal take on the London Riots, informed by conversations I have had in the past about crowd mentality and gang behaviour, with people who had first hand experience.

When I was 19 I met a boy. Handsome, clever, with jet-black hair and olive skin, a pensive 16 year old boy called Chris. I remember being fascinated by his eyes: at a glance, a warm deep brown. But as we talked, all I could see was a hollowness, pain, loneliness, anger, desperation.

When I asked him where he was from, he told me the name of his gang.

Not his hometown, his neighbourhood, or the city where he had spent most of his life, or even where his parents were originally from, but his gang. The people who had shaped his life, who had given it meaning. The people who “had his back”, who would die for him. Who meant more to him than family, who had provided for him when society had failed him.

We walked along outside, snow crunching beneath our feet, careful to stay within the confines of the detention centre where hours earlier I had registered as a rare Christmas visitor.

He told me of the addictive buzz of empowerment that came with running with a gang, with a crowd of fearless boys, who all believed they had nothing to lose.

Of the adrenaline rush and the tingling that came with flouting society’s rules and knowing there would be no consequences.

Of standing up in front of the police, people you’ve been taught you should fear, and seeing the fear in their eyes instead, knowing they are powerless to harm you until you’ve harmed them first. Knowing there is nothing they can do to you that you haven’t already lived through. Feeling invincible.

We spoke of the value of property, of possessions. For him, nothing had value. Everything can be bought, or stolen. Stealing from the middle classes or vandalising their homes was in his mind a victimless crime – after all, they have insurance and not only can they get their stolen property replaced, but in his eyes they would end up with something brand new. It’s win-win, he said.

What about keepsakes? I asked. Photographs? He looked puzzled. I had to remind myself that this was a boy who believed nobody in the world loved him, nobody cared about him besides the boys who stuck by him. Why would he need photographs of them – he saw them every day. His emotional attachment even to them felt guarded – he was well aware that many of his friends would end up under ground or behind bars at a frighteningly young age.

Thinking back now about the day I spent with Chris, I feel I have a different perspective on the London riots than the people around me.

There are those who are appalled by the opportunistic looting, appalled that these kids would break through a shop’s windows and steal things, that they would vandalise property. I am appalled too, but unsurprised. Let’s remind ourselves that many of these kids come from an environment not dissimilar to Chris’. Vandalism isn’t new to them, theft isn’t new to them, it’s around them every day. If it isn’t necessarily the norm, it’s frighteningly commonplace.

That barrier simply isn’t there.

The empathy we feel with the shopkeepers and small businesses who have lost everything to the fires: how would this translate to a young lad raised in poverty or generations of unemployment? For many, owning a business feels about as attainable as owning a dragon, and they see only the financial impact – remedied by insurance companies – rather than the emotional impact on the owners. They don’t have any reference point to understand what it means to risk your savings, to toil for 16 hours a day to keep a small business afloat in a recession.

The shocking photographs of rioters throwing bricks and burning timber at the police. Many of us see a brave person standing there, a family man perhaps, working hard and risking his life for not enough pay. A real person. The knowledge that Chris and his friends would have instead seen a faceless shape in riot gear, powerless to stop a growing swarm of rioters, saddens me.

The “if you’re not with us, you’re against us” mentality that hooks otherwise good kids or makes them feel powerless to say no to getting involved, gives me a sense of powerlessness too.

There is a depressing irony to the fact that the adrenaline rush, the buzz of overwhelming excitement that came with being part of a massive crowd for positive achievements – my Total Wipeout auditions for example – is the same thing fuelling the rioters. By nature a shy person, with adrenaline coursing through my veins and a crowd shouting my name, there I was hamming it up and performing for the crowd – so unlike me that I felt possessed, powerful, invigorated. It was better, more addictive than any drug.

Is it really possible that smashing up London with an energised crowd feels the same? That otherwise good kids are being swept into the frenzy by this incredible feeling?

Is it really possible that this is the only way they feel they can make their mark on the world?

Your comments, thoughts and experience of the London riots are most welcome.

image from Dave Hill's London Blog at The Guardian, "Things I believe about London Riots"
Posted by mum versus kids at Tuesday, August 09, 2011