When celebrity chef Annabel Karmel challenged me to create a Pig Watermelon with my children, there was simply no way I was ever going to turn her down. After all, I'm creative and pretty skilled with a melon baller thanks to my experience making 150 perfectly round dark chocolate truffles for my local Women's Institute.

In her new book, Annabels' Kitchen: My First Cookbook, the Pig Watermelon looks so summery, scrumptious and fun, and above all easy to make. We didn't have all of the ingredients, but we did have a perfectly ripe watermelon, so thought we could produce a close approximation. Perfect for enjoying the hottest April on record with 3 preschoolers and 2 toddlers as my little helpers, right?

Well, let's just say that with the guidance of our mini helpers, our pig ended up looking more like a vaguely sinister Manga Rabbit... but we thought we could work with that, it being Easter and all. 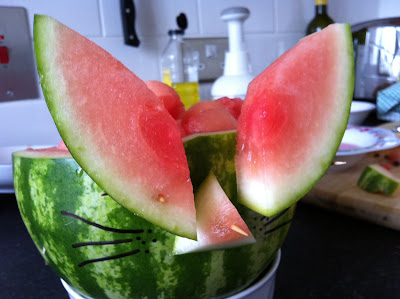 Most of the irresistably bright pink melon balls had been licked by at least one toddler before being carefully placed back in the watermelon, and the five kids and my entire dining room table were covered in watermelon juice and little sticky pink handprints by the time we were finished.

Incredibly pleased with their independence, our children grinned and chatted all the way through the making of our Pig Watermelon / Creepy Manga Rabbit. I know from Danger Boy's post-war-style butter sandwiches (ugh) how much he loves helping me prepare meals, and I guess the same goes for most children. The older ones helped the littler ones scoop out the melon, and everyone took turns without a fuss. My friend (a local mum) and I took a step back every now and then to just observe and absorb their happiness, their utter contentment.

So while I'm a teensy bit jealous that MummyTips' Pig Watermelon and Thinly Spread's Pig Watermelon both look like they belong in a magazine (they did have much older helpers after all!), I think ours was a great success. 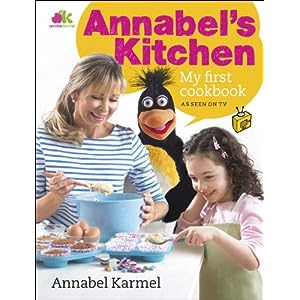 Annabel's Kitchen: My First Cookbook (as seen on ITV) has lots of great recipes and ideas for getting your children involved in the kitchen.

The toddlers especially liked helping with (and eating) the Bagel Snake, Oriental Plum Chicken Wraps and Far-Too-Easy-Banana-Ice-Cream. The Salmon Lollipops and Animal Cupcakes were a massive hit with the preschoolers.

Click here to buy your own copy of Annabel's Kitchen: My First Cookbook.
Posted by mum versus kids at Thursday, May 05, 2011