Me, the most highly qualified high school drop-out ever

I never finished school. Ahem. The long and brutally honest version of the story involves me being whisked away in the night from real live monsters to a turbulent world of shelters, hand-to-mouth living, a new name and identity. Think The Thompsons episode of The Simpsons, but without the splendid rendition of Little Buttercup from The Pirates of Penzance.

The sanitised version of the story is that I lost my way, and through hard work and blind luck made it into an Alan Sugar type thing, but without the millions (there's still time, though, so fingers crossed!)? This is the version most people get - the more honest story leaves them shifting from foot to foot, unsure about whether they need to give me a big hug or run a mile in the other direction.

More on that later.

Tara's theme for The Gallery this week is Education, so I've dug around to find a picture of me from my school days. Here I am about to turn 9, looking pretty much exactly how I do now, but with what for me counts as "dead straight hair". 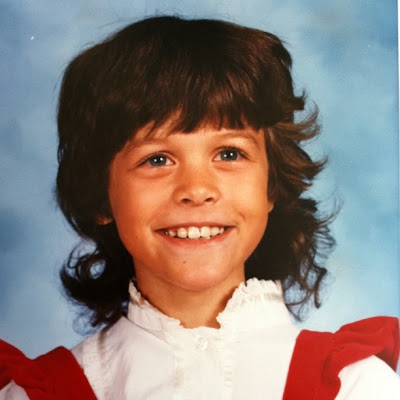 I was the shortest person in my class by at least a foot, but was a seriously quick little thing on the soccer field and a fearless player. My best subjects at that age were Spelling, Art, and French.  In gymnastics I was mediocre at best, but always enthusiastic, and was one of the few who could shimmy up the rope to the gym's ceiling. I played shortstop on our school baseball team, and when we won, our coach (a.k.a. the Cool Girl's step-dad) treated us to chocolate milkshakes.

I was a Patrol at school, meaning I had to leave class early to don my reflective uniform and stand in the road to help the little ones cross safely.  My School Patrol team got treated to a pancake breakfast at McDonald's by our local police officer, Constable Finney, for our outstanding work. Really.

I was a Computer Tutor, my years of writing ridiculous 3 line programs on my Commodore 64 having finally paid off.


I had a temporary crush on pretty much every guy in my class except the one with the pet sticks and the one who had that icky too-short-shorts mishap at Track and Field Day. I thought Corey Hart was the bee's knees, and used to perch on top of the monkey bars at the bottom of my school field with my friends listen to his debut album on Ryan's bright yellow Sony Walkman.

I loved school. It was my life. So being torn from school and one step short of living rough was really not for me.

So my mum pulled out all the stops and tried to get me back into school. We struggled. At age 16, in my neighbourhood and with my background, the teachers assumed that my poor grades demonstrated that I would never amount to anything. In French schools, my F in English meant to them that I must not know how to speak English properly... "If she can't even speak her own language, how will she be able to function in French?". Never mind that the F was because my A+ paper (on Oedipus Rex and not How To Speak English) never made it onto my report card, or that I had been at French schools since age 4.

Despite the risk that our new location and identity would be discovered, she contacted one of the staff from my previous life, who then managed to produce a possibly slightly fudged transcript. And off to school I went. An Italian school this time, and where I was read to in English by the teacher, and where I was forced to "learn" basic french grammar that I had been using perfectly since age 7.

Seeing my anger and frustration, my mum somehow managed to convince a local college to take me on. So there I was, aged 16 and 2 months, with a measly 21% in Maths and even worse grades in Physics, and never having finished high school... starting my first day in Health Sciences at Dawson College in Montreal.

I graduated with Honours two years later, and with Distinction from my Biochemistry degree three years after that. And with stellar performance in my Bioinformatics and Management certifications after that. I guess that makes me the most highly qualified high school dropout there is!

But just the right breaks at the right time, and here I am.
Posted by mum versus kids at Wednesday, March 23, 2011