Daddy has a list too, but his is rubbish and should be ignored

I am not at all pleased with the wailing and screaming competition you enjoy having at bedtime when Daddy is out climbing. For you, I have sacrificed my body, my career and my sanity. I have baked stuff (okay, it was once, and it did involve a little bit of help from Betty Crocker). I have begun to come to terms with appearing in public on a regular basis with snot and/or porridge smeared across my thigh.

Daddy has a list too, but his is rubbish and should be ignored. Just because that one time we left you nappy free for too long and some pee shot across the room and hit Daddy in the mouth does not mean that he deserves nicer behaviour at bathtime.

Review of Prince of Persia: The Sands of Time

A few weeks back I was invited to a super sneaky sneak preview of Prince of Persia : The Sands of Time at the London Headquarters of Disney. They tortured me by treating me to a once in a lifetime experience in their screening room and then swearing me to secrecy until after the premiere, so I have been bursting with excitement and frustration ever since. I should warn you, I'm not a film critic or a particularly good writer, just a Prince of Persia enthusiast!! Anyhow here goes... 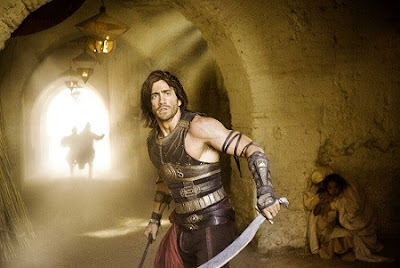 Source: http://www.cinematical.com/
Synopsis:
The makers of Pirates of the Caribbean, Walt Disney Pictures and producer Jerry Bruckheimer, join forces with award-winning director Mike Newell (Harry Potter & the Goblet of Fire) for the blockbuster movie event of the summer, PRINCE OF PERSIA: THE SANDS OF TIME – an epic action-packed adventure set across the mystical lands of Persia. A rogue prince reluctantly joins forces with a mysterious princess and together they race against dark forces to safeguard an ancient dagger capable of releasing the Sands of Time – a gift from the gods that can turn back time and allow its possessor to rule the world.  Source: Disney Pictures


Review of Prince of Persia: The Sands of Time:
Prince of Persia strikes the perfect balance between action, adventure, humour and romance, and is reminiscent of the much loved classic adventure movies we grew up with, like Indiana Jones and the Temple of Doom, and Romancing the Stone. The film is set amid rolling sand dunes and the combination of impressive cinematography and the sweeping orchestral music had me completely hooked from the first minute of the film.

I can't say that I was overly impressed with the "mysterious princess" (Gemma Arterton) - there was something about her that seemed a bit wooden and out of place, though perhaps that was intentional given her situation. I was similarly a little disappointed with Sir Ben Kingsley's character - he is a superb actor, but the script doesn't give him much room and as a result his character was somewhat lacking in intensity. Good, yes, but I was hoping for a powerful character along the lines of Saruman from The Lord of the Rings.


Jake Gyllenhaal, on the other hand, makes the film his own. Much like our swashbuckling hero Indiana Jones or even Captain Jack Sparrow, his character will win over any audience with its charm, cheekiness and dry humour. It's safe to say his incredibly sexy unkempt look certainly doesn't hurt. He was a perfect choice for the role of Dastan, and I think we'll be seeing him cast as the lead in many more of these fun adventure and action movies.

The film is packed with exhilarating and beautifully choreographed action sequences. Fans of the Prince of Persia game will appreciate the fluidity of some of Jake Gyllenhaal's moves - the style and tone are true to the game, but executed in a much more subtle way than most game-inspired films.

I won't give any more away... All in all, I thoroughly enjoyed myself, and am really looking forward to its official release in UK cinemas so I can see it again!

We were walking through an unfamiliar neighbourhood the other day, and Madeleine spotted a church. Now, before I continue, I have a confession to make: I'm not a regular churchgoer. I have deep-seated Catholic guilt built in and readily available, and the idea of our kids not being baptised (yet) fills me with anxiety (purgatory doesn't sound all that great, really), but no, churches don't really feature too much in our everyday lives. I didn't think much of my failure to educate Madeleine in terms of religion until this incident...

Anyhow, we're walking past a church, and Madeleine decides this is a great time to elucidate all those bits of Christianity for herself that I never quite got around to explaining to her properly:

Madeleine:  Look, mummy, that's a church! That's like St James! (where we went for Christmas mass)

Madeleine:  That's where Jesus was living at Christmastime. But he doesn't really live in the church does he, mummy?

Madeleine: Because he lives with his Daddy!

Me: Yes, that's about right.

Madeleine: And his Daddy is called Adboral (Admiral) Nelson!  And he lives at London!

Last Minute Offer for May Half Term Holidays

I'm bursting with excitement about my visit to Disney last week... okay, it was Hammersmith (London) and not Florida, but hey, small steps, right? Anyhow I am anxiously awaiting permission to tell you all about the ultra secret sneak preview of... I can't even tell you then name yet! Well, you'll have to wait, but just know that some time soon they will be releasing a high energy beautifully choreographed adventure film that left me smiling like a lunatic on the tube on the way home. Anyhow, while we await permission to tell you all about the film, I thought I'd give you a heads up on some excellent last minute offers and Kids Eat Free deals they have for their May Half Term break, Summer holidays and beyond.

Escape the weirdly wintery English weather, enjoy a fabulous family holiday, and save money too - who could ask for anything more? And no, the photo below was most definitely not taken in Hammersmith. Arrival Period: 5th July – 18th November 2010
Book 5 or more nights in a Disney Hotel (Moderate or Deluxe) including ticket before 2nd August and and you’ll enjoy FREE Disney dining for the duration of your stay.
Free dining includes up to 100 eateries across the Resorts and all 6 Parks at Walt Disney World, meaning there is something for every occasion. From fine dining to meals with Mickey and from indulgent delicacies to healthy choices. The Free Dine offer makes dining at Disney hassle free and saves you money too. This offer is combinable with the 10% discount web weekend offers. Terms & Conditions apply.
Click for more details >>


Save up to 60% when you book Staybridge Suites (Non-Disney Hotel)
Arrival Period: Stays between 18 April – 11 June, 21 August - 1 October and 31 October – 22 December 2010.
On select travel dates you enjoy savings up to 60% in this all-suite hotel centrally located near the magic of Walt Disney World Resort. Features 1 and 2 bedroom air conditioned suites with fully equipped kitchens and separate living room and provides comfort and convenience for everyone in the family. Located in Lake Buena Vista just 1.5 miles from Walt Disney World Resort. This offer is combinable with the Kids Eat Free offer. Terms & Conditions apply.
Click for more details >>

Arrival Period: 23 February – 4 July 2010
Book by 31st May 2010 and get a free Kids Eat Free Card for every child if you stay in one of our Good Neighbour Hotels (non-Disney). Valid in over 130 restaurants in the Orlando area. For every adult meal purchased at one of the participating restaurants a child can eat for free! This offer is combinable with the 60% off Staybridge Suites offer. Terms & Conditions apply.
Click for more details >

Disclosure:
Clicking on the affiliate links above helps me ensure Really Kid Friendly remains a free resource for parents with unbiased, honest opinions about great places to go with babies and children. I have affiliate links for a wide range of businesses brands and only promote those which I'd be happy to recommend to other parents.
Posted by mum versus kids at Wednesday, May 05, 2010 No comments: