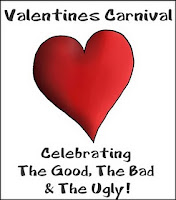 Claire’s Valentines Day carnival made me think of this life-changing event from January 2004:
My boyfriend (G) and I were up in over the Christmas holidays, staying in a cozy little cottage. That morning I lay there, tucked under 3 blankets on one of those funny beds that fold out of the wall, groggily coming to after sleeping off a fair amount of whiskey-and-ginger-ale and a week’s worth of celebrations up in .
All I could imagine doing was spending the whole day in that bed, springs digging into my side, G poking at the fire with a stick as men do, and maybe stretching so far as to read the Craven Herald. Instead, G insisted that it was the perfect day for a hike. Hmmm… freezing cold, sleeting, and foggy in the middle of , yes, what a beautiful day for a hike. I scowled at him, hoping this would bring him to his senses. He pestered me until I finally relented and we set off on our hike up to Simon’s Seat, the highest peak in the area. After about 4 hours of me grumpily trudging uphill wearing every item of clothing I own in hopes of keeping out the damp cold, muttering curses under my breath, we finally reached the peak. I looked around and could see…
… nothing. Absolutely nothing. We were smack in the middle of thick cloud, and instead of seeing the whole of , I could see about 5 feet in front of me, consisting of wet gray rocks, slush, and …. G on one (now soggy) knee in the slush in front of me, holding my knitted red mittened hands in his.
There is no way to describe that feeling, knowing what’s coming, wondering whether it's real or an elaborate wind-up, being ever so slightly petrified and unbelievably excited all at once. I thought I was going to burst. A million things when through my head, most of them being completely inane, like “I can’t believe he’s proposing while I’m wearing his dad’s enormous fleece socks over my jeans”, and “gosh, if I’d said no, how would we have gotten back down off this peak?”. But mostly I was thinking, "a grumpy, frizzy-haired and famously unfashionable Canadian girl dressed for the cold is not a pretty sight, and this guy is looking at me like I'm the most beautiful girl in the world. This is real."
Of course, I said yes.
Posted by mum versus kids at Sunday, February 14, 2010 2 comments:

Elliot will always be my (rascally) little baby, even when he's 45

I can already see a huge distinction between my kids' personalities, even at 17 mo and 34 mo. Madeleine is the most cheerful little bug you could ever imagine - she literally springs out of bed singing and chattering. I can barely even speak until 11 am, so I think she must get it from my dad, who likes to chat about his love of sorting mangoes (for proper ripening) at 5 a.m. Anyhow... she's also very precise and methodical, reads and paints with intense concentration that you rarely see on a (nearly) 3 year old, and loves being a "grown up big girl". It doesn't take much imagination to work out that by the time she hits school age she could very easily be a curly version of Summer from School of Rock. She's very much a First Child.


Elliot on the other hand is, well, ... like the tazmanian devil or Roger Rabbit in an incredibly delicious little wrapper. On speed. He has never been seen in one place longer than 10 seconds, and runs everywhere at lightning speed. He refuses to climb down the stairs backwards, but instead launches himself forwards off the top step and hopes for the best. If he wants something, he doesn't bother asking, he just climbs up and gets it. If he is hungry, he pours all the Shreddies out onto the floor and just stuffs a handful into his mouth and speeds away giggling and crunching. In short, he's a mischievious little rascal but too quick to catch and reprimand. But even if he slowed down long enough for me to tell him off, who could possibly stay angry at my baby boy's sweet little face? He knows, and he milks it. He'll be that kid in school who saunters in 5 minutes after the bell, and smiles sweetly at the teacher while he makes up an excuse for not having done his homework, and be forgiven all his sins (there will be many - that I can guarantee!) for his adorable little grin. He'll be the classic Baby of the Family.

It's strange to think that neither of them will ever have the same experience I had growing up as a middle child (my legs are firmly crossed). I think having less attention when I was growing up made me more outgoing, more frank, more energetic, more expansive in my gestures - I needed to have a big personality to be noticed at all. When it suited me, though, I could tone it right down and just sail along in my older brother's slipstream - people automatically pinned his personality and abilities on me, so I really lucked out at school having all my sins forgiven because people assumed I was as smart and diligent as my big brother.


Being the baby of the family and then suddenly having it ripped away is something that both the older child and middle child experience, and actually I think it affects your whole perspective on life, your ability to deal with emotional trauma, and your expectations of others around you. I don't know whether that's a good thing or a bad thing. I have this sense that the Baby of the Family will always have an extra special place in his mum's eyes - whether it's shrugging off his rascally behaviour or turning up with tupperwares full of food when he moves into his own place.

All I know is that my delectable little Elliot will always be my baby.
Posted by mum versus kids at Thursday, February 11, 2010 No comments:

Madeleine's Daddy is Up to the Sky

Madeleine: Mummy?
Me: Yes...?
Madeleine: You love Daddy because you're not very big.
Me: Errr...what?
Madeleine: You love Daddy because he can reach all the things, and you can't reach them. Because he's big and big. And he's up to the sky. And you only have small legs, but Daddy has big furry ones so he can reach everything.
Posted by mum versus kids at Tuesday, February 09, 2010 2 comments:

Wordless Wednesday: Elliot and Daddy Asleep on the Sofa 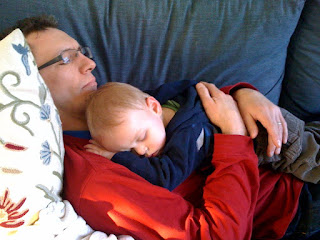