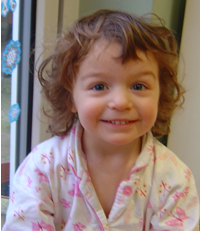 Madeleine is in a really funny 'changeling' phase at the moment. At times she is such a grown up little girl, with a fierce independence and the insight and cleverness of someone who has been here before.

Tonight, though, she decided that she wanted to be a baby again. We brought her friend C home from nursery, and stopped in to see his baby sister V. She must have noticed what a fuss we were making of adorable little V, and so when we got home, Madeleine says


"Mummy I'm not a big girl anymore today. I don't want to play with my big friends because I'm only a baby now. And now I don't know how to say any words, I only say Ga ga ga ga. Okay?".

Errr.... OK. So I played along for 5 minutes, and thought it would all go back to normal but suddenly she's demanding to wear a nappy, she won't go in her bed because it hasn't got enough bars on it, and she wants lullabies instead of her bedtime stories. ARGH!!!!!  So, 45 minutes later there I was, still trying to be firm but fair, but absolutely NOT giving in, and giving myself some sort of ulcer in the process. Just as I thought I might actually throttle her, she says,


"Actually mummy I'm not really a baby, am I? My birthday is at March and it will be 3. And 3 is big like the big childrens at nursery. I think maybe I'm a little bit big and a little bit small."

And then she zoomed off and placed the last of her pull-up pants (untouched in 4 months) on the stairs for me to take to Baby V, and snuggled down into her Big Girl Bed.
Posted by mum versus kids at Friday, January 29, 2010